Bryce Harper – Did you see him blow the pitcher a kiss a couple weeks ago?  Kid is gonna get drilled if he does that in the big leagues, but that is not what qualifies him for my June edition of Stupidity in sports, no, instead it is his failed attempt to earn a spot in the Mustache Ride Through Time. 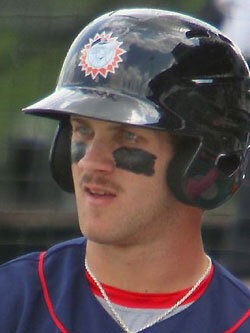 Stanford University – Stanford is actually not the stupid ones here, but instead they have decided to remind their football recruits how stupid it would be to not go there.  They have sent out a letter to all the football recruits that shows the final BCS standings, in which they finished ranked 4th, and included the average annual salary of the graduates of each school.  It shows that the average Stanford grad makes $119,000 a year, the other teams in the top 25 average more than $39,000 less a year.  Bravo Stanford.

Texas Fisherman – If you have ever been fishing, you have lied about the size and how many fish you caught.  Well, don’t do it anymore in Texas, it can get you arrested!  That is right, Texas recently passed a bill that makes it as big a deal as a potential felony to “misrepresent the size, weight, or provenance of a fish in a fishing tournament”.  Fisherman have been guilty of cutting off the tail of a fish in order to make it fit into a category that betters the chance to win a tournament and stuffing lead weights into the stomachs of of bass to win tournaments.  They say everything is bigger in Texas, including the repercussions of your fishing stories.

Kyle Busch – He has been in the news quite a bit lately for his fueds with fellow NASCAR drivers, but one thing you may have missed was his recent speeding ticket.  Now, it is no surprise that a race car driver would get caught speeding from time to time, but Busch managed to get clocked at 128 mph in a 45 mph zone.  Pretty sure he set the high score on that rode.

Nicolas Leoz – The FIFA representative from Paraguay, was cleared of the report that he had demanded knighthood in exchange for his vote for England as host of the 2018 World Cup, but it has now been reported he has suggested England rename their FA Cup after him.  What happened to the good old days when corruption was simply leaving a duffle bag full of fresh cash would do the trick?