When we started this site years ago, without expectations of where it would take us, I never could have dreamed of the opportunities it would present for us. Since we started I have covered events put on by the NFL stocked full of Hall of Famers, covered every level of baseball from elite High School to the MLB and in over a dozen ballparks. I have been in the press box and locker rooms of the NHL and will be on the pitch of multiple USL teams along with covering pro rugby, rodeo, and lacrosse coming in the near future. This is not meant as a pat on the back, but instead to create perspective as to what I am about to share. Saturday I had the privilege of covering the most awe inspiring sporting event I have ever experienced, the DoD Warrior Games.

From 2010 to 2014 the Warrior Games were exclusively in Colorado Springs as it was put on by the US Olympic Committee in partnership with the DoD (Department of Defense). In 2015, the DoD took over the games and began moving it to new locations each year, always hosted by a branch of the military. The Marines hosted in 2015 in Quantico, followed by a trip to West Point hosted by the Army in 2016 and the Navy welcomed the Warrior Games to Chicago in 2017. In 2018 the games returned to their roots and took place at the Air Force Academy in Colorado Springs.

There were athletes representing eight “teams” at the 2018 games, with those being the Army, Navy, Marines, Air Force, SOCOM (Special Operations Command), United Kingdom Armed Forces, Australian Defence System, and the Canadian Armed Forces. They competed in 11 Paralympic style events over nine days with gold, silver, and bronze medals handed out for each event. The events featured wounded, ill, and injured service members who enrolled with their service’s wounded warrior programs and then qualifying for the games. The featured events are archery, cycling, time trial cycling, field, indoor rowing, powerlifting, shooting, sitting volleyball (a great watch, look it up), swimming, track, and wheelchair basketball.

On the grounds they held exhibits to show able bodies and non-abled alike what it is like to participate in adaptive sports and that people of all physical conditions can compete and play together.

I was at the Bronze Medal Game between the Navy and Marines and Gold Medal game between the Army and host Air Force. The Navy beat the Marines rather handily to take home bronze, while the Army took home the gold over Air Force.

In the end, the results didn’t matter (although you couldn’t tell based on the incredible competitiveness on display on the court) but it was the conversations had with these athletes and support that could be seen that was truly incredible. There were dozens of emotional support and service dogs in the building that assist many of the athletes with PTSD and other mental health struggles. Also in attendance were combat canines who are suffering from PTSD themselves.

This is Tisha Knickerbocker’s dog and a couple of Tisha, a Marine. She was a small scrappy point guard who was quick all over the court and not afraid to mix it up and get physical when needed. In the event’s program it lists her injuries as PTSD, Traumatic Brain Injury, Spinal Cord Injury, and Loss of motion in left ankle. In the event you were wondering, there is plenty of chairs that collide, people flip over (as you can see as it is Tisha’s chair flipped over below) and the collisions are loud. You get a whole new appreciation for these people as athletes when sitting just feet away from the basket and seeing the effort put in. 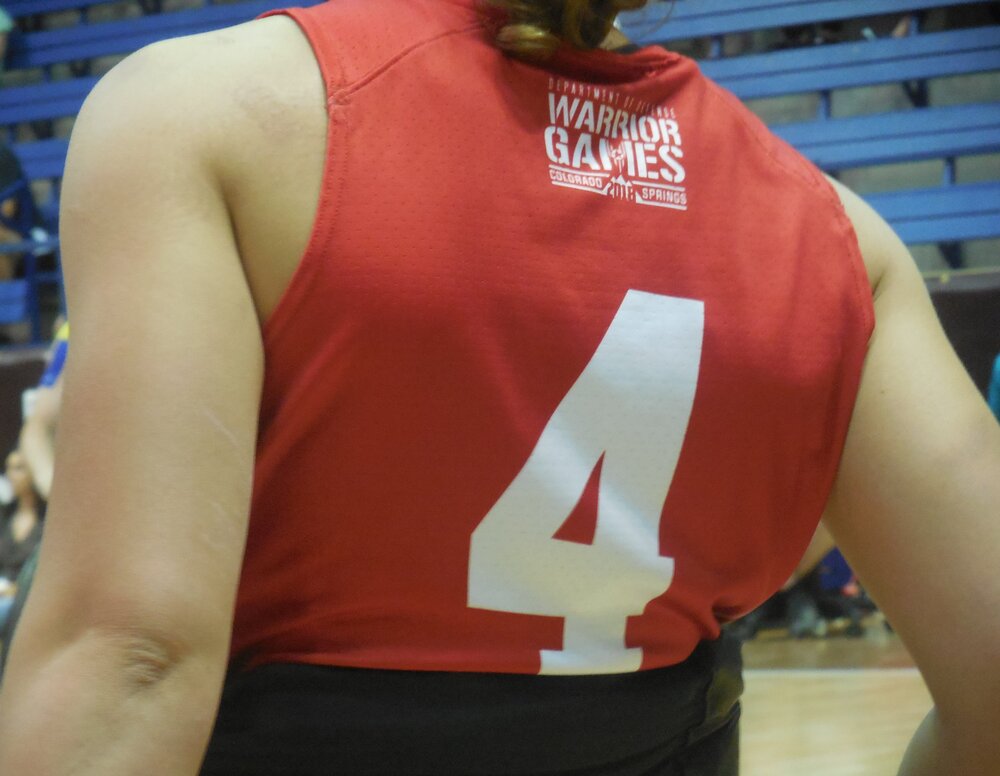 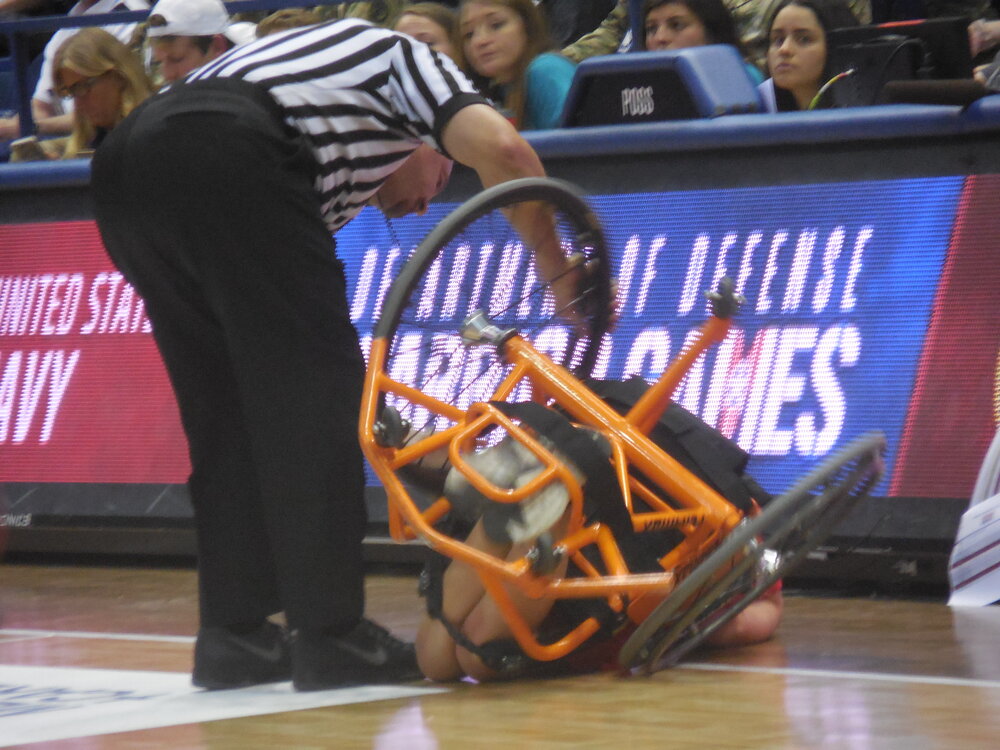 Cassidy Busch was hit by the force of an explosion that blew out her entire lower back, but she found normalcy again in sport where she not only competed in wheelchair basketball, but also cycling, field, and swimming.

Alan Thomas’ injuries weren’t disclosed, but he is missing his right leg below the knee. That didn’t stop him from competing in basketball along with powerlifting, sitting volleyball, and track. 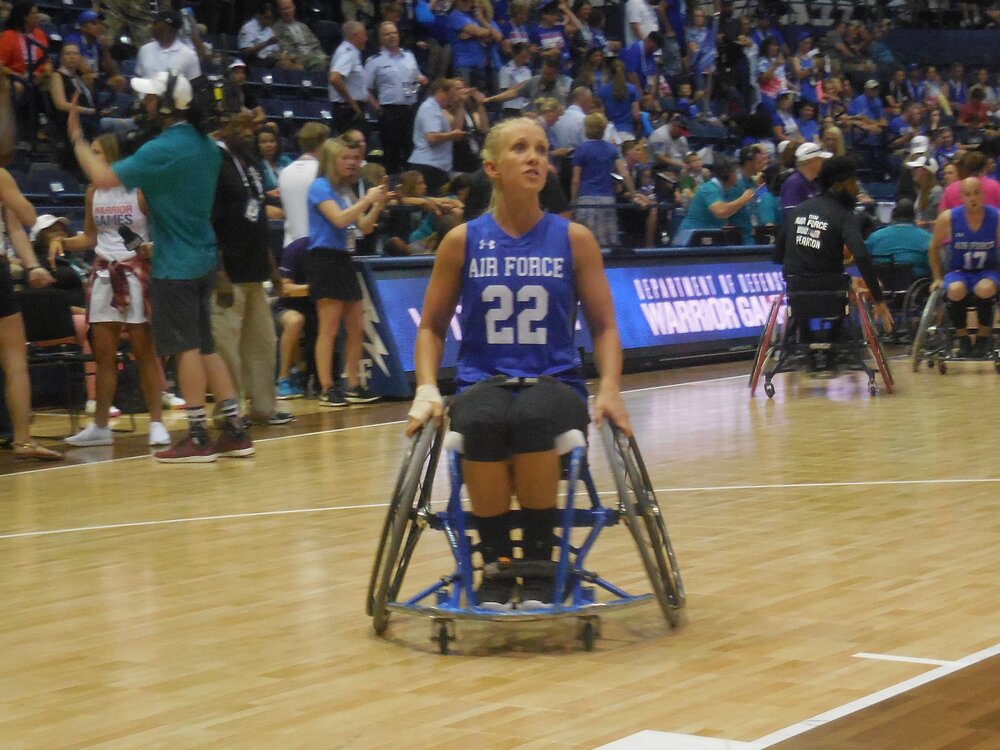 These were just some of the incredible athletes I had the honor of meeting on this day. Many others competed, which represents only a fraction of those currently rehabbing. Do yourself a favor, if you are near a city that will be hosting the Warrior Games, go. If you are unable to experience this first hand, donate to one of the many charities that help our service men and women injured in the line of duty, or simply shake the hand of a vet to thank them for their service. Sports has a unique ability to bring people of all backgrounds and beliefs together. It was an incredible experience to see those who gave so much to allow us that freedom use sports to regain normalcy in their ever-changed lives.